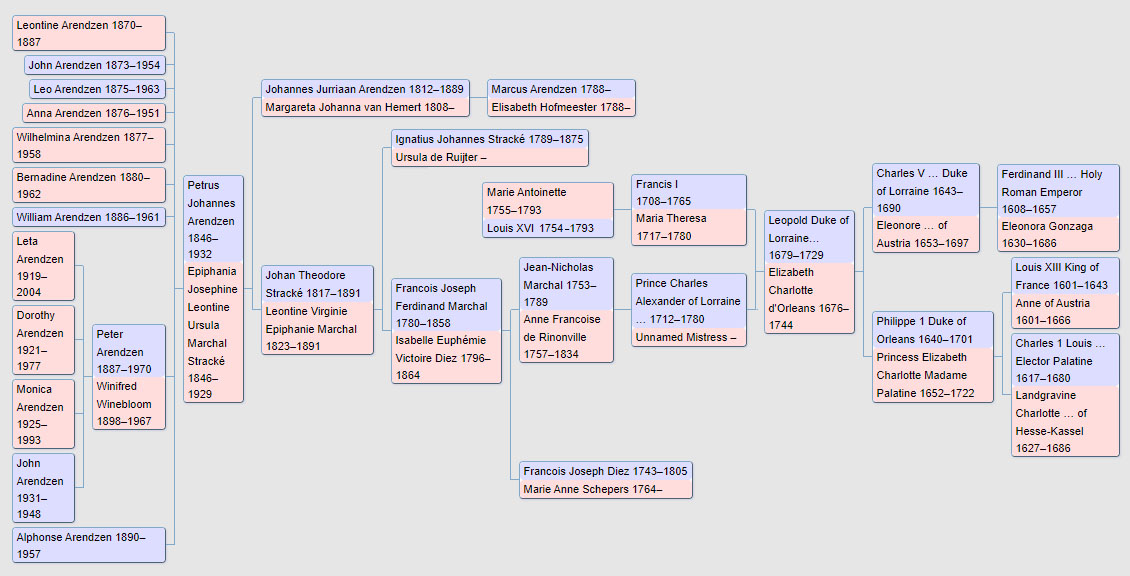 Click the above image to enlarge.
The tree above gives a simplified view. For complete and interactive trees, click the following links to go straight to the Arendzen tree  or the Stracke tree.  Also shown are the connections to sculptor Gottfried Kappen.

The family had always claimed a connection with French nobility (usually citing Marie-Antoinette) and there appears to be a line of descent that can be traced back to King Louis XIII of France, Ferdinand III of Germany and beyond.   The connection to Marie-Antoinette would have been her uncle, Charles Alexander of Lorraine.   Anne Françoise de Rinonville and Marie-Antoinette were cousins.

One connection that did need close scrutiny was that of Prince Charles Alexander of Lorraine, who had many children with a string of mistresses.   Some are named, like Elisabeth de Vaux but others remain anonymous.  He was known to have fathered a daughter, Anne Françoise de Rinonville , who married Jean-Nicolas Marchal.  This is a key link in the line of descent which otherwise appears to be quite straightforward.

There is an interesting entry in Wikipedia that sheds a little more light on Charles Alexander’s private life:

N.B. It has proved very difficult to ensure that all details are correct, in part due to the wide variety of dates and spellings to be found on official documents. For example, I have come across five different ways that Stracké has been spelt including; Strackel, Strakke, Strack and Strackée.

However, this is nothing compared to the problems associated with given names, for example Leo Paulus Johannes Stracké is also to be found with his name reversed i.e. Johannes Paulus Leo Stracke. Dates are often out by a year due to the way they are recorded but sometimes they can be several years out. If you come across any dates that you believe to be wrong, please let me know. Similarly, I would be grateful if you can help with any detail that I have omitted e.g. places, dates etc.